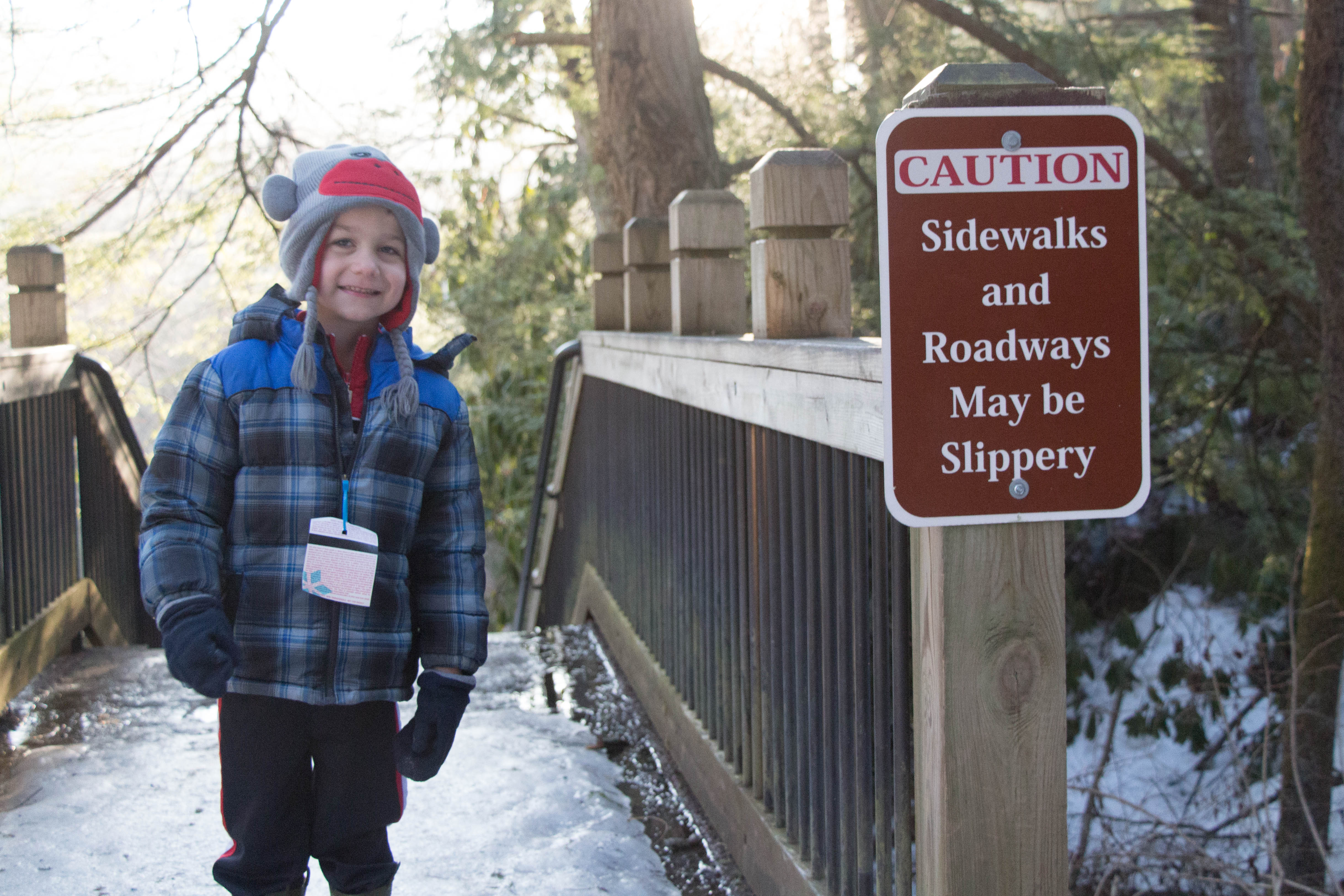 Family vacations are great. I have met people who dread family vacations as they go on about the driving, the lines for the attractions, and being cramped with the family for an extended period of time. For me, the driving time is just quality time, and we get along remarkably well as a family and genuinely enjoy being together regardless of how much space we have. As far as those lines are concerned, we don’t like them either and intentionally travel at times where we can anticipate shorter lines. 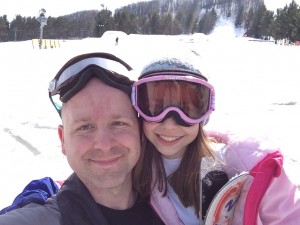 Take this family vacation for example. We took the family skiing for the very first time. Instead of going on the weekend during the peak of ski season, we went during the week in early March. The snow might not be the ideal skiing conditions, but we anticipated spending more time on the bunny hill where it would not matter as much. On a plus side (for the family, not the skier in me), the weather was nearly 50 degrees warmer than when our church’s youth group was at the very same mountain earlier this winter.

So it is winter, not a lot of people up in the mountains, and there is still a fair amount of ice and snow around. The last time we were on vacation in the area we enjoyed our trek to Swallow Falls State Park to view some of the water falls. Why in the world would we not return to see these beautiful water falls? What could possibly go wrong visiting the largest waterfalls in Maryland during the winter during season, on a weekday, and at an off-peak time when there are sure to be very, very, very few people around?

In our defense, the park was open. We arrived just a few minutes after it opened, dropped $3 in the “honor system” collection box and then walked down the clearly marked path. It was the same path we had walked down last summer and we were all very excited to see what the falls looked like after the heavy snowfall of the winter had begun to melt. That is about all that I can say in our defense. The entire path was covered in a thick three to six inches of ice. We held onto the railing and marched on ahead until we reached the safety rails that surrounded the top of Muddy Creek Falls. It was beautiful. We longed for a closer look, a better view, and a chance to explore the path that meanders along the side the Youghiogheny River and Muddy Creek. Our kids were all smiling, dressed for some pictures, and eager to see this natural beauty up close. But we failed to truly understand the signs around us, signs posted by those who knew what we didn’t…

CAUTION. Sidewalks and Roadways May be Slippery. Yeah, that was an understatement. As we looked down the long tiered staircase that descended some 100 feet beside the waterfalls we saw thick patches of ice on each of the half dozen landings, but the steps looked clear. Looks can be deceiving. As I carefully walked down the stairs I had held my sons hand in my right hand as his right hand held onto the railing. I also had my camera gear (4 lenses, a tripod, a few filters, and a flash) strapped to my back as my Canon DSLR hung precariously around my neck. We made it almost all the way to the bottom and stopped on the final landing before assessing the conditions for the final dozen or so steps.

The final steps looked a little more icy than the ones we had successfully navigated. As the mist from the fast flowing river descended upon these steps and rocks all around us they had turned to ice and created a virtual winter wonderland full of beauty and peril. I leaned forward to check the conditions of the next step and found out really quickly that it was slick and icy. In fact, it was too icy to stand on. In that split second where I knew that I would not be standing come the next second, I let go of my sons hand and began my icy freefall down the steps. In what seemed like an eternity, my life did not pass before my eyes, but I did wonder if any of my camera gear was going to survive as I slid down the stairs on my back (with all the aforementioned gear in my backpack).

When I finally reached the bottom and stopped sliding around like the puck on an air hockey table I looked up the stairs expecting to see my wife either giving me that look she give me when we both knew I did something foolish or to see a sigh of relief mixed with concern on her face. I had just enough time to hope for the later when I saw something much more terrifying than the former, I saw my 5 year old son now sliding down those same steps barreling towards my like a winter Olympian (just without the poise or grace). I managed to get just enough footing and traction to slide over towards where the bottom step was, which was inches from where the frigid water flowing by rocks and the icy railing ended ceasing to provide any protection from a one-way polar plunge.

I caught my crying son and just held him in my arms like never before. Thankful that he was safe, and my mind recalling the photo that I had taken just moments before about how the sidewalk may be slippery, I thanked God for keeping us safe despite not heading the warnings. The two of us laid there huddled up on a bed of ice very grateful it remained white and miraculously free from any red. My wife’s body language loudly communicated that she was on her way down to us, and I quickly signaled her to stay where she was. After all, we still had two daughters on the steps with her that needed her, and we did not need another body at the bottom of these steps.

Obviously our briefly dramatic story ended well; 24 hours later I am writing this post and no one had to go to the hospital or figure out how to call 911 when you have no cell phone reception. My wife and I were rather quite as we walked back to the parking lot, a stark contrast to all of the laughing and joking we enjoyed just a few moments earlier. We were quite because we were shaken up, but we were also thanking God for His hand of safety and listening to Him as He had a few things that He wanted to share with us to learn. Specifically for me, read the signs; benefit from the wisdom of those who have gone before you.

God has a side of Him that seems to enjoy the ironic, or at least humbling us by reminding us that not matter how smart we might believe we are, we are not even in the same league (or universe) as He is. “But God chose the foolish things of the world to shame the wise; God chose the weak things of the world to shame the strong.” (1 Corinthians 1:27) Children to humble religious leaders, choosing the likes of David and Gideon when far more “qualified” older brothers were available. One of my favorite passages in Scripture is found in Job 38 as God “answers” Job’s questions with “Where were you when I laid the earth’s foundation? Tell me, if you understand.” (verse 4). God knows how to put us in our place, and I am eternally thankful for that. Despite all that I had written or spoken on perspective and perceptions I still had more to learn.

From my perspective, my perception was that I could safely traverse the steps despite the clearly marked warning. In fact, I read this morning on the Maryland Park Service’s website the following:

​The Youghiogheny River and Muddy Creek are white water rivers that contain severe natural hazards, such as waterfalls, violent rapids, swift currents, deep pools, underwater hydraulics, cold water, slippery rocks and rough terrain. Injuries and deaths have occurred in and around these waters. Visitors should be alert for these hazards and EXERCISE CAUTION to protect themselves and any children from potentially life threatening accidents.

Although that was not all spelled out as clearly on that brown rectangle sign my son posed next to, it was clear that this path may be dangerous. The U.S. National Park Service has a very memorable sign posted at Great Falls Park that has helped to keep my whole family in line while enjoying the waterfalls along the Maryland/Virginia state border, but no amount of signs posted can overcome a perception that “I know better” or “The rules don’t apply to me”. 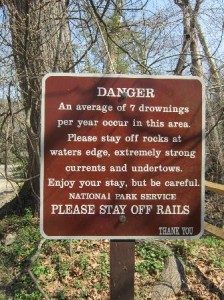 We would do well to head the warnings of those who have gone before us. Chances are, you and I do not know better and the rules do apply to you us. There is a lot of wisdom that can be gained and heartache that can be spared by expanding our incomplete, and correcting our inaccurate, perspectives and challenging the perceptions that cause us a very painful fall.

Today my son is jumping around, laughing, and shows no signs of what happened just 24 hours ago. I, on the other hand, have learned to do a better job learning from those who have gone before me. Next time you come across a warning sign in life, whether it be on the side of the road, in a sermon, or in advice from a friend, take a moment to challenge your perception that you know what you are doing, and what you are doing is best, and be open that God may be giving you a chance to save some pain and heart ache.